Dr Tollesson is a Brisbane based, European and Australian trained Neurosurgeon, who specialises in brain and spinal surgery for adults and children. 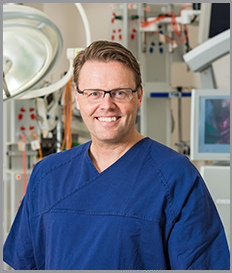 Dr Gert Tollesson is a senior, experienced neurosurgeon with specialist qualifications from Sweden, Norway and Australia. He is experienced in performing a wide range of adult and paediatric intracranial and spinal procedures utilising advanced micro-surgical techniques and state of the art technology.

During his late teens and early twenties Dr Tollesson became an officer in the Royal Swedish Navy, completing a number of peace-keeping missions. During this time he participated in Naval Pentathlon for Sweden and ranked number 3 in Sweden for this sport. He then left the navy to study medicine and during summer break committed his time back to the Navy to train others in diving medicine and hyperbaric oxygen therapy.

Once his medical degree was completed Dr Tollesson began his medical specialisation as a General Surgeon and had almost completed his general surgical training before being introduced to the exciting and challenging world of Neurosurgery. Dr Tollesson gained his specialist neurosurgical registration in Sweden and Norway in 2003 before coming out to Australia as a consultant Neurosurgeon in September 2006. In 2007 he became a Fellow of the Royal Australasian College of Surgeons (FRACS).

Dr Tollesson has studied and trained worldwide, with international clinical experience through a number of elite European hospitals. His achievements in general surgery, orthopaedics, sports medicine, paediatrics and neurosurgery have allowed him to access world-class facilities and learn from world-renowned medical professionals. He is passionate to learn and incorporate the latest advances in research and technology to achieve the best results for patients.

Dr Tollesson is a keen participant in national and international conferences. He holds numerous positions and memberships of Australian, New Zealand and European neurosurgical associations; such positions include past Chairman for the Neurosurgical Society of Queensland (NSQ) and Secretary for AOSpine. Dr Tollesson also held the position of Neurosurgical representative for RACS Queensland State Committee from 2016 to 2019.

Dr Tollesson is passionate about raising-up a new generation of highly skilled doctors and is committed to mentoring and training these doctors.

Dr Tollesson is married with three children and lives in Brisbane.